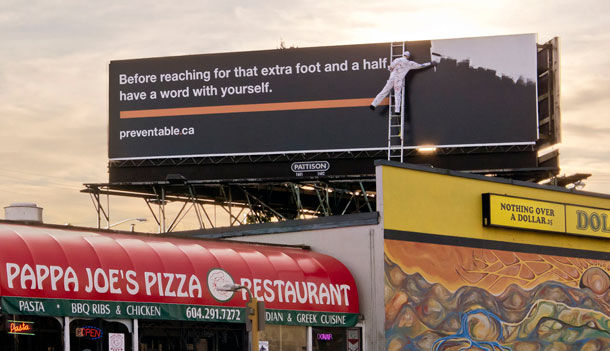 We wanted to focus on ladder safety and preventing ladder-related injuries. Because falling from a ladder can cause a major injury or even death. Every year, 44 Canadians are killed by falls from ladders. We created this billboard to get people thinking that a little extra reach on a ladder can have big consequences.

Instead of showing the aftermath of an injury, this billboard shows the moment before an injury might happen. We placed a dummy that looks like a painter standing on a ladder. He is precariously leaning on the ladder rung while he reaches away to paint the billboard. The headline on the billboard reads: Before reaching for that extra foot and a half, have a word with yourself.

Instead of showing the aftermath of an injury, this billboard shows the moment before an injury might happen. Whether you’re using a ladder for painting or cleaning eaves troughs, think before you reach. It could save you and your loved ones from injury. To learn more about ladder safety, check out this quick Holiday-Ladder_Safety.