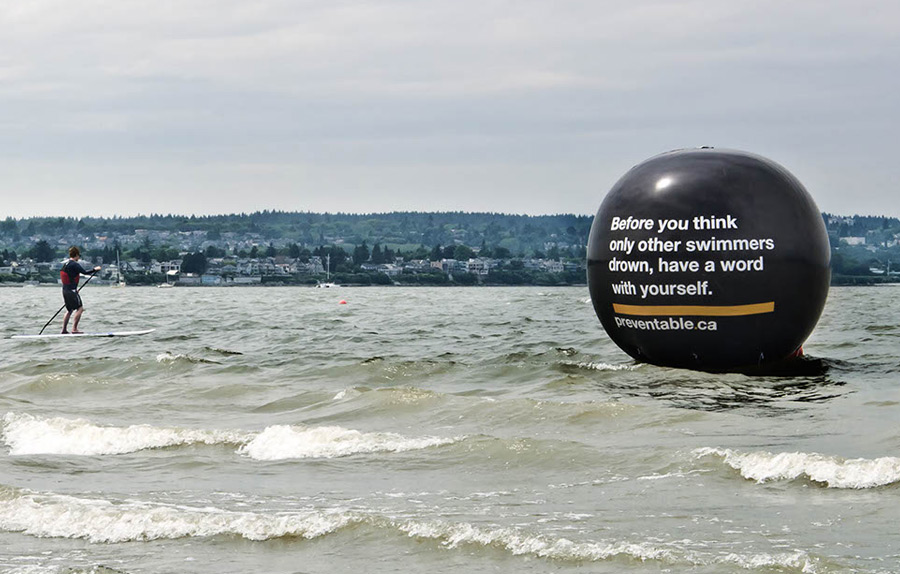 If you’ve been reading this blog for a while or are a B.C. beach bum, you might be familiar with our summer drowning prevention campaign. This year, we’re tweaking what we usually do in order to get people thinking more about their attitudes when it comes to drowning. As in previous years, we’ll be leaving branded flip-flops and beach bags on beaches across B.C., but this time around, we have a new slogan emblazoned on the beach towels we leave behind as a reminder that some people might not be able to reclaim their beach goods if they don’t take precautions in and around the water. This year, our sought-after towels will read, “Before you think only other swimmers drown, have a word with yourself.”

The campaign, which is a joint effort by Preventable, Canadian Red Cross and BC Hydro, kicked off at English Bay in Vancouver. Local media and representatives from each organization including Dr. Ian Pike, spokesperson for Preventable, were in attendance. So was a huge beach ball (see photo below)!

It’s at this time of year that most of us head for the water. Because of the popularity of water recreation at this time of year, we want fellow British Columbians to take a moment, think about how they act in the water and ask themselves if they or those they love are at risk of drowning because of their behaviour. It’s because of facts like the following that it’s a good idea for all of us to have a word with ourselves this summer:

Having a word with yourself about your attitude on drowning is to ask yourself, “Do I take risks around water?” If your answer to this question is “Yes,” then you’re not alone. Your fellow British Columbians can benefit from your thoughts on the risks of water.

Lifejacket tans are the trendiest accessory this season, get yours this summer on a boat near you!… https://t.co/VAXYHH2eMb