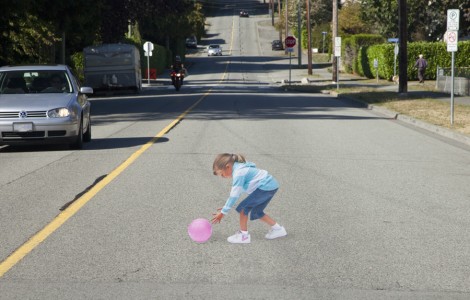 We did something completely unique to raise awareness that there are more kids on the roads during back to school season. In fact, this campaign was a Canadian first. Preventable, BCAA Road Safety Foundation, and the District of West Vancouver launched a 3D illusion geared to make drivers slow down at high-risk intersections.

If you read the Maclean’s, The Globe and Mail, CNN.com, ABCNews.com, Vancouver Sun, Province, or National Post articles or heard interviews on international and North American radio and TV programs about the illusion, you’d know that drivers in West Vancouver were confronted with what seemed like a young girl running after a ball in front of their vehicle. In reality, it was decal on the pavement that looked like a real person. Signage near the 3D image read: You’re probably not expecting kids to run out on the road.

Consider the following facts from BCAA and it becomes clear that change is needed to reduce injuries.

According to BCAA, speeding is just one of many reasons why child pedestrian injuries happen around schools. Other reasons include parents making U-turns, backing up into crosswalks, and letting children out from the driver’s side into oncoming traffic. The good news is we can do something about it. By changing our attitudes and actions in school zones, we can help keep our kids safe.